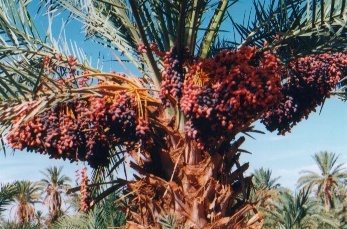 The date palm (Phoenix dactylifera L.) is a dioecious long-lived monocotyledon, which is cultivated for food, fuel, shelter and fiber. This species is slow flowering and fruiting and it is difficult to determine the sex of the trees before the first flowering, when they are about 5 years of age. The maximum of vegetative growth is reached at high temperatures (30-40°C).
Few offshoots produced by individual trees, limit traditional propagation of this pecies. Also, the realisation over 20 years ago, of the potential for in vitro culture propagation had little success. The number of date palms in the south Mediterranean side depends on the country. The mean yield of date production, expressed as Kg of dates by tre, is related to the water content of the fruit. It varies between 18 Kg in Morocco and 50 Kg in Tunisia. 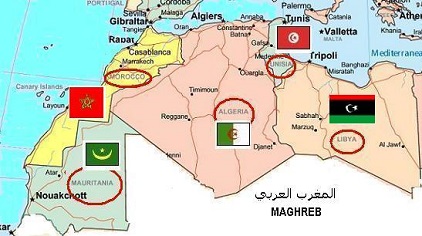 The principal constraints that restrict the date palm culture in the Maghreb conntries are drought, salinity, desert development old age of palm trees, Bayoud disease and decrease in genetic diversity of the palm groves.Contrary to the concept 'the date palm, tree of the desert', this species can vegetate and produce only with sufficient supply of water. Thus, the production can vary in certain countries, such as Morocco, from 1 to 10, according to the rainfall. In 1985 (dried year), the production was 12 000 tons, while it reached 120 000 tons in 1990 (wet year) (Direction de la production végétale, 1990). Old age of the palm groves is, also, a considerable constraint, since 30% of the palm trees in Algeria exceeded the production age (Messar, 1996). A proportion of 45% of the palm trees in Tunisia has more than 50 years (Rhouma, 1996). An urgent renovation of the plantations is necessary. Bayoud disease, a vascular fusariosis of date palm, caused by Fusarium oxysporum f.sp.albedinis, remains the most serious disease. The estimates show that this plague dstroyed the 2/3 of the Moroccan palm groves in one century. Very good cultivars disappeared from the genetic stock in Morocco. This fusariosis still extends in Algeria and threat the Tunisian palm plantations (Louvet & Toutain, 1973; Djerbi, 1988).The consequences of all these biotic and abiotic stresses that undergo the palm plantations lie initially in genetic erosion of the oases. The man is not excluded as actor in this situation. Its lack of interest for the cultivars of medium and low qualities is an indirect cause of this impoverishment of the genetic pool. The extension of the monovarietal culture will have harmful repercussion in the future. Thus, the Algerian palm groves currently count 45% of the cultivar 'Deglet Nour'. The same cultivar occupies approximately 60% of the Tunisian palm plantations and continues to be multiplied. Thus, in 1939, cultivar composition made up of 14% of 'Deglet Nour'. This percentage became respectively, 19%, 38% and 60.5% in 1956, 1974 and 1995.

Without evoking the totality of the research projects undertaken on date palm in the Maghreb countries, only the main trends are discussed. They correspond, firstly, to the study of genetic diversity and the development of palm plantations and, secondly, the setting of the genetic fight against Bayoud and the multiplication of the selected date palm genotypes.

Not being able to predict the ecological and economic changes, which await the future generations, it is of our duty at least to inventory the genetic resources of the date palm in order to organize their preservation and to transmit, thus, a more significant genetic richness.
In Algeria, each palm grove is typified by a distinct cultivar composition, which results from a local selection within the oasis. Only about 50 cultivars have a broad geographical distribution. The number of cultivars in aoasis remains, therefore, related to the speed of selection undertaken. While being based on morphological characters of the fruit and the seeds, this number varies from 10 in the recent oases to 200 in the oases with active selection (Hannachi et al., 1998).
The proportion of the khalts varies from 1% to 10% according to areas. The male trees remain not identified. A repertory of the Algerian date palm cultivars was published recently. The list of 1000 cultivars inventoried is provided according to a data base, conceived in respect of the field investigations and the fruit and seed characters. However, morphological and molecular (RAPD) markers show that it is difficult to set up groups of affinity between cultivars (Benkhalifa, 1999). Moreover, there is no relation of interdependence between the data obtained by the two marker types. The multivariate analysis of the individuals, giving a continuum, is in accordance with the existence of only one date palm poppulation where it is necessary to maintain and widen its genetic diversity by the foreign gene introduction. In Morocco, the study of the genetic diversity of about thirty date palm cultivars, realized by the same types of molecular markers (RAPD), revealed a low polymorphism and did not allow, either, to highlight structured genetic groups (Sedra et al., 1998). No distinction was proven between the Moroccan and foreign cultivars (Tunisia and Iraq). The given organization of the cultivars using RAPD markers did not show correlations with resistance to Bayoud and fruit quality. The use of polymorphic isoenzyme markers in the analysis of the genetic diversity of the Moroccan palm groves made it possible to estimate within-populations variability at more than 90% of total diversity of the date palm, whereas variability between the populations is limited to 10%, approximately (Bendiab et al., 1998; Bendiab, 1998). A part of more than 60% of the date palm genetic resources in Morocco consists of khalts, which can be exploited in the improvement for the quality of dates and resistance to Bayoud. In order to develop the genetic resources of date palm and to contribute to the enrichment of the genetic pool, the marginal palm groves, derived from seeds of unknown origin, must be considered for agricultural development. To achieve this objective, 2 principal goals must be reached. They correspond, firstly, to the early identification of the male sex of date palms in order to manage space and enhance productivity of the palm plantations. Secondly, knowledge of the ecological and physiological mechanisms of complete fruit maturation leads to sustainable uses of genetic resources of the marginal palm groves. The scientific researches undertaken within this framework show that the marginal palm plantations, like that of Marrakech, consist of more than 50% of male trees, while only 2% of this material is required to ensure pollination in the productive palm groves (Majourhat et al., 1999). Biochemical and molecular studies (enzyme activities, isoenzymes, RAPD, AFLP) are used to characterize the male sex of the palm tree (Bendiab, 1999). In addition, the ecological and biochemical aspects of the fruit maturation (climatic parameters, activity of the oxidizing enzymes) are studied by taking as references date palms of Marrakech and Zagora (south Morocco) (Koulla, 1999).

Two principal objectives are currently considered in any project of genetic improvement of the date palm; a high level of resistance to Bayoud disease and a good fruit quality. The creation of new varieties often needs the exploitation of the khalts (date palms derived from seedlings) already available in the fields (more than 2.5 millions in Morocco) and showing a good fruit quality. The collected offshoots are then tested for their resistance to Bayoud. The resistant clones will be multiplied by in vitro culture. Finding genotypes of high quality can, also, be carried out using progenies obtained by directed crosses. This last way remains relatively long when compared to the first one.The success of these strategies of varietal creation remains related to the advance of scientific researches aiming at the setting up reliable tests of resistance to Bayoud and the success of the in vitro culture of all the date palm genotypes. In order to make a selection pressure that could check quickly resistance to Bayoud disease, the experimenter often uses in the artificial inoculation, the most virulent isolates. Thus, the degree of resistance is related to the aggressiveness of these isolates of Fusarium oxysporum f.sp.albedinis (FOA). The study of the genetic diversity of 200 isolates of FOA based on vegetative compatibility and molecular markers (RFLP, RAPD) showed a low polymorphism (Tantaoui & Boisson, 1991; Fernandez & Tantaoui, 1994; Tantaoui et al., 1996). The isolates seem to belong, all, to only one group of compatibility and show the same molecular characteristics. These results are in accordance with the suggested idea of a monoclonal origin for the FOA. Many studies of the host-pathogen relationships lead to different results, which are difficult to apply. Thus, resistance to Bayoud appears to be associated with high levels of plant constitutive peroxidases (Baaziz & Saaidi, 1988; Baaziz, 1989; Baaziz et al., 1996). Also, high isoenzyme polymorphism was found to be a characteristic of date palm seedlings derived from resistant cultivars (Bendiab et al., 1993). Induced resistance coincides with high activities of the enzymes belonging to classes of oxidoreductases (peroxidases) (Brakez, 1993) and hydrolases (chitinases, glucanases) (Amraoui, 1993) as well as an accumulation at the palm roots, of cafeoylchikimic acids, which were inhibiting the development of the FOA (Ziouti, 1998). High isoenzyme polymorphism was found to be a characteristic  of many date palm seedlings derived from resistant cultivars (Bendiab et al., 1993). The genome analysis of the date palm in relation to resistance, allowed the detection of two plasmid types called 'R' (resistant) (low size) and 'S' (sensitive) (high size) lodged, respectively, by the mitochondria of the Bayoud-resistant and sensitive cultivars (Benslimane et al., 1994).In the fields, the artificial inoculation made it possible to select several tens of khalt clones exhibiting resistance to Bayoud and good fruit quality. The multiplication on a large scale of this material can be carried out only by the in vitro micropropagation. Unfortunately, this technique could not satisfy all the needs. Thus, in Morocco only 100 000 vitro-plants were planted between 1987 and 1992 (period of 5 years), while the program included a plantation project of 3 millions vitro-plants between 1987 and 2007 (about 750 000 plants by a period of 5 years) (direction de la production végétale, 1990). The deficit in plant material can be explained by the complexity of the date palm tissue culture, as well for the organogenesis as for somatic embryogenesis. If the organogenesis is judicious to produce seedlings in good genetic conformity, it has weaker potentialities of plant production when compared to somatic embryogenesis. Several researches are currently undertaken to find biochemical and molecular markers (proteins, isoenzymes, RAPD) being able to test the genetic conformity of the vitro-plants produced by one or the other method (Baaziz et al., 1993; Azeqour et al., 2000 (in preparation)). In addition, the physiological and technical aspects of somatic embryogenesis cultivars (culture media, markers of embryogenesis...) are studied in order to propagate the recalcitrant date palm cultivars (Baaziz et al., 1994; El Hadrami & Baaziz, 1995, El Hadrami et al., 1995). Thus, creation of oligovarietal palm plantations, only based on the cultivars easy to multiply, could be avoided.
ACKNOWLEDGEMENTS.
This work is supported by the International Foundation for Science (IFS), Stockholm, Sweden.